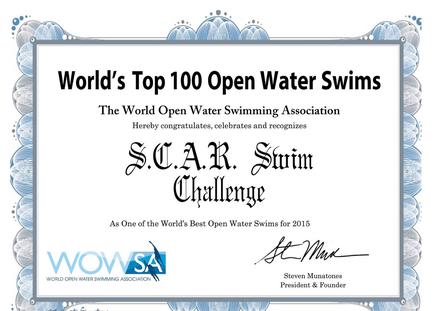 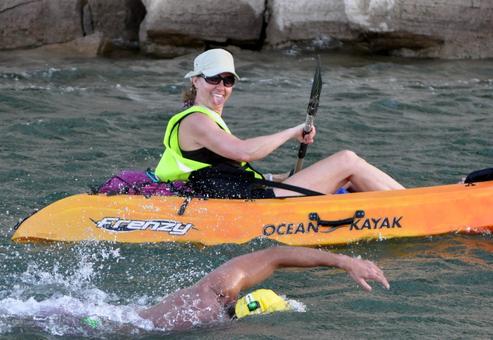 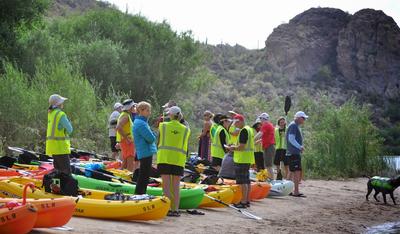 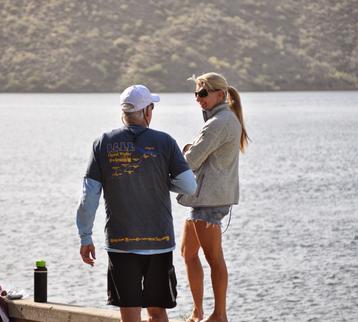 A well established stepping stone to completing channel swims around the world starting with the English Channel, Catalina Channel, or around Manhattan Island.  SCAR is for experienced swimmers and crew wanting to push their boundaries - day after day.  It can be sunny and calm or very cold and windy.   It's why we call it a challenge - because it's challenging for both the swimmer and their crew.    You never know what mother nature will throw at you.   It's not the environment for prima donnas - they don't fare well.   The people you meet are from around the world and the friendships last long after the swims are completed.  After finishing, SCAR you're ready for any open water challenge.

Saguaro Lake: Considered the warm-up swim and a great way to shake the SCAR jitters.  The first reservoir is Saguaro Lake, a 9.5-mile (15.2 km) swim at 1529-feet (466m) elevation,  and is rimmed with canyon walls.  The first part of the swim is essentially boat free due to speed limits in the narrow canyon at the start.  The lake is home to large-mouth bass weighing 12 pounds, small-mouth bass, rainbow trout, walleye, black crappie, tilapia, yellow perch, and carp weighing as much as 30 pounds. It is within the Superstition Wilderness of the Tonto National Forest. It was formed by the Stewart Mountain Dam, a concrete thin-arch dam located 41 miles northeast of Phoenix, Arizona. The dam is 1,260 feet (380 m) long, 208 feet (63 m) high, and was built between 1928-30. It was named after a ranch that used to be located nearby known as the Old Stewart Ranch. The swim begins at the east end of Saguaro Lake – the base of Mormon Flat Dam below the Mormon Flat Heliport - just past the "DANGER KEEP OUT" sign.  The swim ends at the buoy line guarding the Stewart Mountain Dam.

Canyon Lake: The beauty of this swim is what brings people back year after year to SCAR.   The boat ride to the start, which can be chilly, is an excellent time to see the swim course and the wildlife that frequents these narrow canyons.  Canyon Lake's elevation at 1,660 feet (505m), was formed by the Mormon Flat Dam. Despite the natural beauty of the swim, it trains swimmers to rely on their crew/paddler to guide them.   All the twists and curves following the old Salt River are disorienting.   The dam is 380 feet long, 224 feet high and was built between 1923-25. The dam is named after nearby Mormon Flat, a place where settlers from Utah stopped to camp. Canyon Lake, with a surface area of 950 acres (380 ha), is the smallest of four lakes created along the Salt River. It is within the Superstition Wilderness of Tonto National Forest and is a popular recreation area. Fish populating the lake include rainbow trout, largemouth bass, smallmouth bass, yellow bass, crappie, sunfish, catfish, and walleye. Wildlife in the area includes bighorn sheep, deer, and javelina that roam freely in this area of the national forest. The swim begins at the buoy line below Horse Mesa dam, notoriously the coldest start of SCAR, and ends 9 miles (14.4 km) at the buoy line protecting the Mormon Flat Dam.

Apache Lake: Swimmers consider Apache the "main set" of SCAR.  This is the big enchilada - the one you travel to Arizona to swim -- the swim that confirms you're an open water swimmer.   Apache is beautifully isolated as you will see from the white knuckle drive into the canyon.   Surviving the single lane dirt road into Apache is considered an achievement.   The isolation means very low boat traffic but don't let the initial serenity and calm water fool you.   If the wind kicks up - and it will - welcome to Cape Horn Arizona.  Apache Lake was formed by Horse Mesa Dam which was completed in 1927. The second largest of the four Salt River Project reservoirs (Theodore Roosevelt Lake is the largest when at capacity) and by far the most difficult swim if the wind picks up. The swim begins at the eastern end of the lake at the buoy line below Roosevelt dam and continues for approximately 17 miles (27.3 km) to the Horse Mesa Dam. The lake separates the Four Peaks Wilderness from the Superstition Wilderness and is considered fairly remote (dirt road access via the historic Apache Trail). The picturesque canyon is framed by the Mazatzal Mountains and the Superstition Mountains. The Horse Mesa Dam, a concrete thin-arch dam, is 660 feet (200 m) long, 300 feet (91 m) high and was built between 1924-27.   The last 7 miles of this swim is visually stunning and breathtaking if you have any breath left to take.   The swim route at Apache Lake in 2021 may be altered due to potential issues with the resort, roads and accessibility.

Roosevelt Lake: The last reservoir in the Arizona S.C.A.R. Swim Challenge is Roosevelt Lake with arguably the most spectacular nighttime open water finish in the United States.  Unlike the previous swims, this lake has only one dam so to make it interesting, there is a 10 km night swim that begins at a very small boat dock approximately 5 miles east of the marina and finishes under the stars and moon at the Roosevelt Dam. This swim can be very calm or choppy and windy.  Both the reservoir and the masonry dam that created it, Roosevelt Dam, was named for U.S. President Theodore Roosevelt who dedicated the dam himself in March 1911, one year prior to Arizona being recognized as the 48th state in the union. The lake is home to a variety of game fish including crappie, carp, Sunfish, flathead, channel catfish, smallmouth bass and largemouth bass.